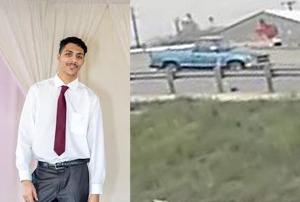 Date of Crime:
02/15/2020
Offense:
Homicide
Victim:
Murder Victim Shaheen Abdulhadi Elkhalili 24 Years Old
Location:
N. Foster Rd. & IH 10 E San Antonio, TX 78244
Crime Description:
Murder Victim Shaheen Abdulhadi Elkhalili
Needed To Solve This Case:
The identification and location of the suspect(s) involved in this Murder.
Synopsis:
On February 15, 2020 at approximately 12:00 pm Shaheen was driving to pick up his wife at work when he was shot and killed. Shaheen had their two children (2 and 3 yrs old) in the back seat. Shaheen exited Foster Rd. from IH-10 and was on the access approaching the intersection when someone in the suspect vehicle drove up next to Shaheen’s vehicle and shot him. After being shot Shaheen rear-ended a vehicle before crashing into a guardrail. Shaheen’s children were unharmed. Shaheen passed away at the scene. The suspect vehicle is believed to be an early 1990s two toned single cab Chevy/GMC pick-up truck (Dark blue/light blue/dark blue – picture is of the suspect vehicle captured on camera.)

Crime Stoppers may pay UP TO $5,000 for information which leads to the arrest of the suspect(s) responsible for this Murder.